Myrtle Beach to Charleston: History and Beaches All in One!

Myrtle Beach to Charleston: History and Beaches All in One!

Just two hours south of Myrtle Beach, one of South Carolina’s most visited beaches, sits the underrated gem that is Charleston. Charleston, one of South Carolina’s oldest and most well-known cities, is rich with history and filled with gorgeous sights. My family and I visited the famed city not too long ago, and it was a very enlightening trip. Going to Charleston feels as though you are stepping back in time, to a pre-Civil War America, with cobblestone streets, horse-drawn carriages, and ornate architecture typical of the antebellum period. We all had a wonderful time visiting the city, and while we had fun, I think it was most important how much my children were able to learn about how America was in the pre-Civil War era in an up-close and personal way that will make its significance always stay with them. 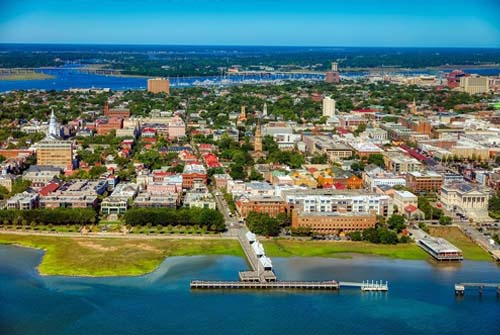 One of Charleston’s biggest attractions is its downtown Historic District. As its name suggests, this area of the city is where you will find much of its oldest and best-preserved buildings. Charleston was originally a port city founded in 1670, on a small peninsula overlooking the Charleston harbor. Remnants of this bygone era can still be found all over Charleston’s Historic District with restored buildings from the eighteenth and nineteenth centuries. One of the most iconic and photographed areas of this district has been named “Rainbow Row.” It is a suiting name since the street boasts a row of old Georgian-style houses all painted in different pastel colors, forming a beautiful rainbow. These homes were all built during the mid-1700s!

The Colorful Homes on Rainbow Row

Another of Charleston’s most visited attractions is the Battery. This walkable seawall runs along the shores of the Charleston peninsula and was originally used as a defensive barricade between the land and any threats coming for the harbor. And while the Battery was originally created to be a coastal defense during the Civil War, today it a peaceful promenade with beautiful views of the harbor that is very pleasant to walk down. We even saw dolphins swimming and playing in the harbor as we walked! We ended our stroll at the White Point Garden, located on the Battery’s southern end. This little park offers beautiful views of the Charleston harbor and you can even see the island which houses Fort Sumter in the distance.

While in the Historic District, my family and I did what many do to take in the sights in a unique way: we took a horse and carriage around the town. Horse and carriages are a staple of downtown Historic Charleston and a homage to its history. Because it is such a popular and fun thing to do, there are many companies that offer these horse-drawn tours. You will see historical and beautiful homes, churches, gardens, parks, and more. The tour guides make learning about Charleston’s architecture and history interesting and fun. Not to mention, experiencing all this history on a horse and carriage will certainly captivate children and adults alike. I know my entire family loved this experience and we all learned a lot about this important little town! There is so much to see in Charleston’s Historic District that we did a walking tour in addition to the horse and carriage tour. 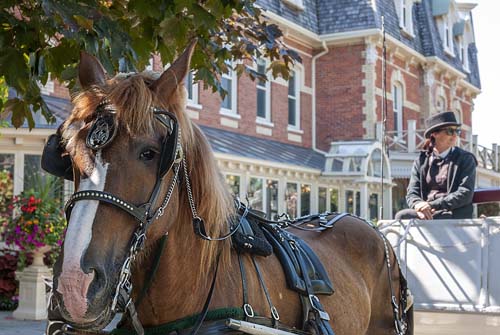 While in Charleston, we stayed in the city’s amazing downtown district, at the Mills House Wyndham Grand Hotel. This hotel was such a gem; not only was it beautiful and very hospitable, but we were right in the vicinity of many of Charleston’s greatest attractions. This hotel located right near King Street—Charleston’s main street that cuts through the city—is absolutely gorgeous with pink exterior walls and a style that is uniquely southern and looks as though it could have come right out of New Orleans’ French Quarter. 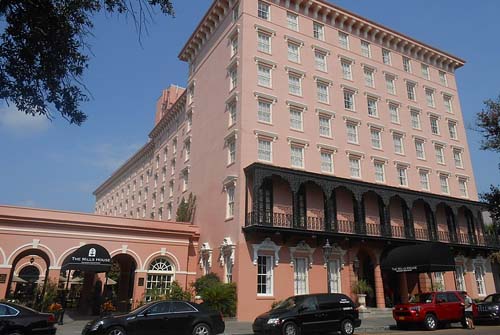 Coincidentally, Charleston also has its own French Quarter. Located there is the famous City Market. This marketplace was established in the 1790s and spans four blocks, where you will find vendors of all kinds selling food, crafts, and unique souvenirs. Also located in the French Quarter is a lovely little park not far from our hotel, Washington Square. This park is much different than the Washington Square Park we are used to back home in Manhattan, and it is home to beautiful greenery, oak trees, flowers, and a 42-foot replica of the Washington Monument—hence the park’s name. 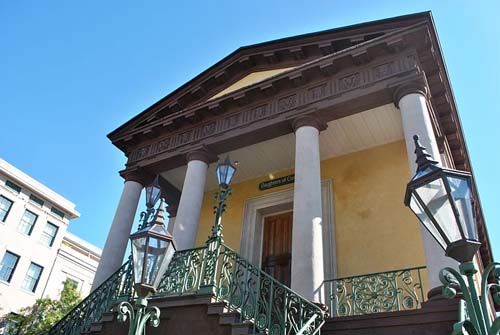 We walked just a couple blocks from the park down Broad Street to visit the famous Old Exchange & Provost Dungeon. While the name may sound intimidating, this 250-year-old landmark is chock full of history and is definitely a must-see for anyone interested in witnessing history with their own eyes. The Old Exchange holds some of Charleston’s most significant history. During the Revolutionary War, it was owned by the British, and its basement was used as a dungeon to hold captured American revolutionaries. Remnants of the dungeon can still be viewed today. The building has changed hands many times in the years since, from British to Confederate to the United States, and is now a museum and historic landmark where you can learn all about its history and see some of the oldest artifacts Charleston has to offer. 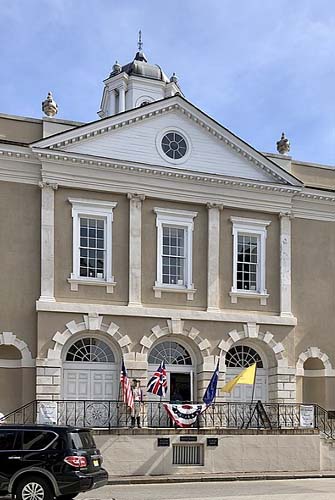 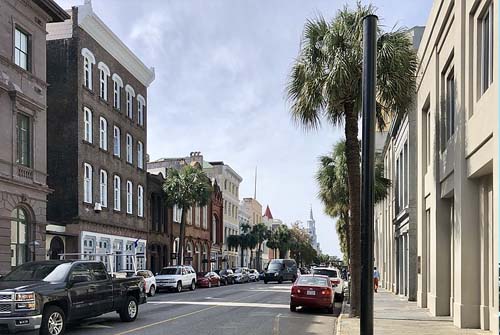 Afterward, we then spent some time strolling up nearby King’s Street, where there is plenty to see and much shopping to do! We grabbed a quick snack at King Street Cookies—a bakery and creamery that the kids certainly loved and helped us take a break from the southern heat outside. Along King Street, we stopped to view the beautiful buildings that form the College of Charleston then continued another few blocks to visit the Farmer’s Market set up in Marion Square. The Charleston Farmer’s Market, open every Saturday during the spring, summer, and fall months, offers fresh produce from local farmers, supports local artists selling their works, and even has live entertainment and food vendors. 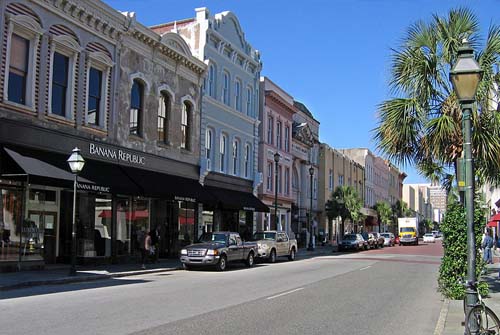 Located on the outskirts of the city, along the Ashley River, lies the sprawling grounds of the Magnolia Plantation. Named one of America’s Most Beautiful Gardens, the Magnolia Plantation was founded in 1676 by the Drayton family, causing it to be not only beautiful but a witness to America’s birth and history. While visiting the expansive manor, we took the From Slavery to Freedom tour offered by the estate, because while we can appreciate the garden’s beauty in modern times, it is important to acknowledge the plantation’s past, and this tour does a wonderful job of explaining the plantation’s extensive 350-year history. This award-winning tour honors the vital roles of the enslaved people who lived and worked on the plantation first as slaves, then as freed gardeners and maintenance workers before becoming Magnolia’s first tour guides when the plantation’s gardens opened to the public in the 1870s. 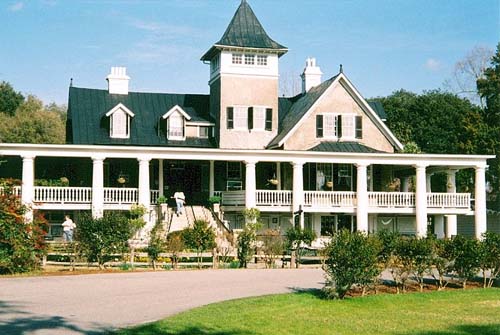 After the tour, we were allowed to walk ourselves through the cabins that were once homes to the plantation’s slaves. There are four preserved cabins on the property, each restored to represent a significant time in the plantation and America’s history: the 1850s during enslavement, post-war Reconstruction, the Jim Crow era of the 1920s, and the Civil Rights movement of the 1960s. It was incredibly eye-opening to walk through these small homes and think about what the people who lived there had endured. This was truly an enlightening experience and should be a must-see for everyone visiting the Charleston area. I think it is so important for our children to see history up-close because it makes what happened much more real and personal.

Another must-see attraction is the famous Fort Sumter. Fort Sumter is a fort located on its own island in Charleston Bay and is most well-known as being the location of the first battle of the Civil War back in April of 1861. Because the fort is located on an island, it is only reachable by taking a ferry from the mainland, as my family and I did when visiting. Once on the island, you can visit the fort or wander the grounds outdoors, which offer a beautiful view of the South Carolina coast. Inside the fort is the Fort Sumter Museum, which has exhibits showcasing the history of the fort, from its construction in 1829 as a result of the War of 1812, the Battle of Fort Sumter during the Civil War, and the preservation of the fort into modern times. You can even get a guided tour through the fort to make sure you get the most out of your experience! 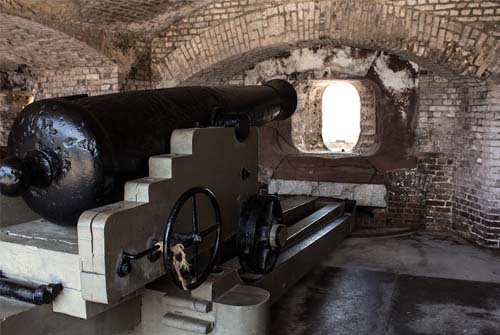 I am always happy when we are able to find such historical landmarks while on vacation with my family. I think it is important for my children to learn about the past through experiences such as this. We had an enjoyable time visiting such a fascinating place, and I know my kids all walked away with great memories and a new appreciation for history. Visiting such an important location and learning on the spot is much more impressive to young minds than just learning about it in class!