Things To Do in Rome in 3 Days

Things To Do in Rome in 3 Days

I’ve always loved history and experiencing new cultures. Europe is one of my favorite places to go and submerge myself in all the unique cultures the countries have to offer. Rome, Italy is certainly no exception. My family and I visited Rome and it was one of the memorable experiences that I am sure we will speak about for years to come.  Rome is a beautiful city rich with gorgeous buildings, culture, and lots of history.  The best part is we did it in 3 days!  Because I want you to love Rome as I do, I have compiled some of my highlights of things to do in Rome in 3 days.

The Streets of Rome, Italy

One of Rome’s most famous sights which is recognizable to people all over the world is the Roman Colosseum. Visiting this ancient site was an obvious choice when we decided to come to Rome. Construction for this giant structure began in 70CE by Emperor Vespasian, and pieces of this original 2000-year-old stadium still stand today. You can view the Colosseum from the outside, or you can buy tickets to go in and see the amphitheater up close and imagine what it must have been like in Ancient Rome. While tickets can be bought at the door, they can also be ordered online in advance, which is what I suggest you do for a fast and easier time. The exterior of the Colosseum is so iconic; the short cylindrical shape that rises above the streets of Rome, the arched colonnades that wrap around each tier, and the lopsided walls that show just how old the structure is and all the history it has witnessed. But the interior is just as fascinating and filled with so much to see and learn. 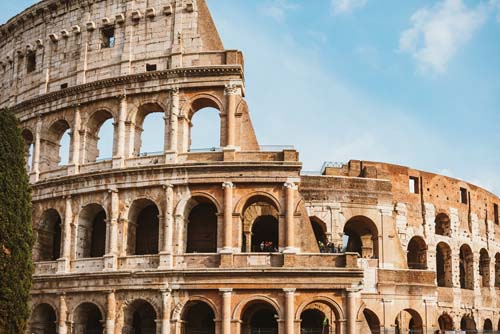 Inside the Colosseum walls open up to an impressive amphitheater, Once standing there you will see the two stories of stands, which could hold up to 80,000 spectators at Rome’s height. Little remains of the original floor of the arena, but that allows you to see into the Colosseum’s basement, otherwise known as the “hypogeum.” This is the network of tunnels and rooms that existed under the arena and were used to house gladiators and animals before shows.  When the Colosseum was still in use, it was used to hold gladiatorial events, exotic animal hunts, and reenactments and plays of famous Roman battles and myths. Being able to walk the Colosseum’s interior paths, stand in the same place, and see the same sight as Ancient Romans is a true one-of-a-kind experience. It allowed us to step back in time, to feel as though we were in ancient times and not just in modern Rome. We were able to witness history and really feel what that must have been like. It was an incredible learning experience, and I know my kids were also in awe of the site we have all heard so much about. 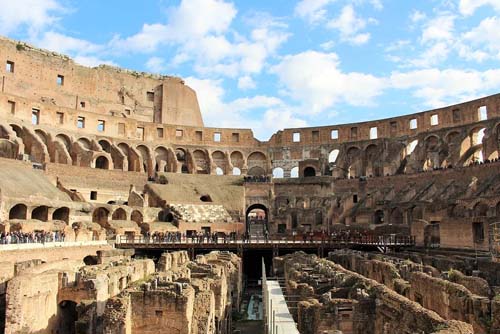 Not even a ten-minute walk from the Colosseum is the Roman Forum. The Roman Forum, also sometimes known simply as the Forum, may not be as universally known and recognized as its neighbor the Colosseum, but it is in no way lacking in history or fascinating sights. The Forum is nestled between Palatine and Capitoline Hills, which make up two of the famous Seven Hills of Rome. Palatine Hill is one of the most ancient sections of the city and is considered the heart of Ancient Rome. Rome originated at Palatine Hill, with evidence of Romans having lived there since 1100BCE, and in Roman mythology, it was also the home of the founder of Rome. Many Roman emperors built their imperial palaces on this hill, beginning with Julius Caesar’s great-nephew, Augustus, whose palace ruins can still be visited today.  With so much history packed into this small hill, it is no surprise to find the Roman Forum situated nearby. 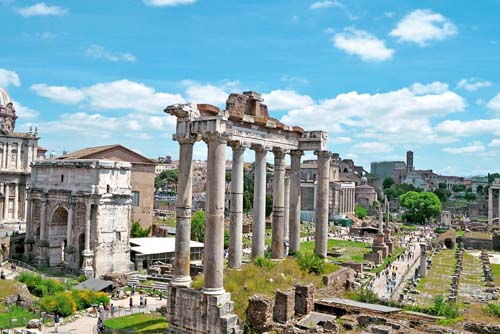 Palatine Hill and the Roman Forum

The Forum was the epicenter of Ancient Rome; it was where so much of daily life occurred for Ancient Romans, and has been called the most celebrated marketplace in both Rome and the world. Here, military ceremonies were celebrated, elections, trials, public speeches, and even gladiatorial events were held. The Forum is so old many historians are unsure of a specific year of creation, but most believe it to be around 500BCE. During Ancient Rome’s peak, the Forum was a plaza filled with a collection of white stone buildings with lines of pillars and red tile roofs and many statues dedicated to famous Romans. Now, however, we are only able to see the remains of the structures that were once the center of Rome. Massive pillars, crumbling walls, and rocky foundations are the only evidence of the amazing square that once stood in its place. It is fascinating to walk down the modern paths, being able to see the ancient pathways and imagine walking through the Forum when it was still in use. Just like the Colosseum, walking through the Roman Forum brings forth a feeling like no other. It’s a feeling of wonder and awe, to be able to witness such an important part of history and to see that some of it still remains so many centuries later. It is definitely a must-see for anyone visiting Rome and it really helps you to connect with and understand the city and its history. 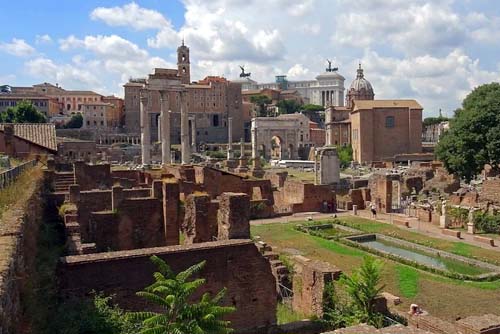 Up-close ruins of the Roman Forum

One of our favorite sites in Rome was another popular travel destination: The Trevi Fountain. Compared to many other places in Rome, this fountain is rather new, having been built in the 1760s. It is massive and gorgeous, and probably the most recognizable fountain in the world. The fountain itself is placed up against the façade of an elegant white building, where large rocks and classical sculptures of people and horses sit at its base. Water pours off the rocks, creating many small waterfalls that cascade into the large fountain pool of turquoise water. The tradition surrounding the fountain is that you must throw a coin into the water to ensure that you will visit Rome again someday. It’s a fun little tradition we were happy to partake in! As mentioned, the Trevi Fountain is incredibly popular, especially for visitors, so there tend to be massive crowds formed around the fountain. If you would like to avoid the crowds, it is best to visit the fountain at dawn. And while it may get crowded, the fountain is incredible to visit at night as well, when the statues are lit up and the water seems to sparkle in the light. No trip to Rome is complete until you’ve visited the Trevi Fountain and toss in a coin!

Not far from the fountain is another one of Rome’s most famous sites—and its most well-preserved piece of Roman History—the Pantheon. The Pantheon was originally built in 125CE, but with how preserved the structure is, it’s hard to tell. What gives away its age is the building’s exterior features, such as the massive pillars lining the entrance and the triangular pediment on top, both classic features of Ancient Roman architecture. The Pantheon was originally built as a shrine to the gods of Ancient Rome, and it is definitely worth it to stop and see this marvelous piece of history!

Also near the Trevi Fountain, you will find the Spanish Steps. This is a low but large set of stairs that leads from one piazza to another. The area surrounding the steps is well known for its shopping, due to the many nearby designer brand shops, window shopping boutiques, and eateries. As life-long fans of fashion, my girls and I always make it a point when we travel to visit each place’s best shopping districts—and Rome certainly didn’t disappoint. Even better, we were able to do some shopping along the beautiful Spanish Steps and the gorgeous architecture of Rome. No matter where you go in Rome or what you do, however, you will always be surrounded by beautiful buildings and sights that are rich with history and culture! 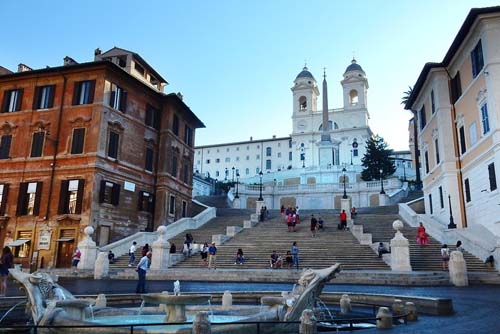